European experts assemble in the fight against fatbergs

In March 2020, we joined representatives from overseas at the European Fat, Oil and Grease (FOG) Summit in Amsterdam. We debated how best to beat blockages, shared the challenges faced in the UK and heard about approaches being taken abroad.

Attendees heard how growing populations and a rising number of food service establishments (FSEs) are putting extra pressure on sewer networks. The result –fatbergs growing faster in European sewers. And the threat does not affect water companies alone – it can impact all areas of society. When fatbergs block sewers, they can cause floods that disrupt businesses, ruin homes and harm the environment.

Our FOG and Unflushables team is on the front-line, battling blockages in our region. Members of the team took an active role at the event – joining other European experts for a panel discussion and presenting on the situation in the UK.

Steve Edwards – one of our Network Protection Officers – joined a panel of experts from across Europe for a live debate.

Representatives from government, utilities and manufacturers discussed whether regulation, education or technology was the biggest priority for improving how the threat of FOG is managed.

The audience had the final say. After hearing from the thought leaders, attendees took to their smartphones to vote which area they felt was the biggest priority. 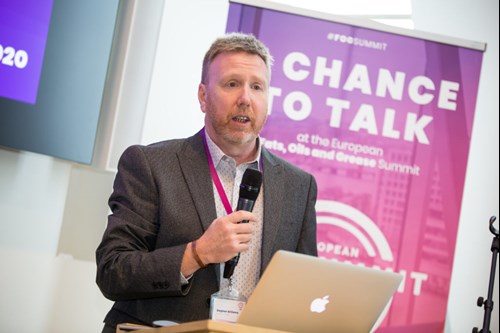 Later, Steve Williams – another of our Network Protection Officers – took the stage to explain the regulatory landscape around FOG in the UK.

He began by dispelling some myths about the UK’s sewer network. He explained that the most sewers are too small to walk through – in fact, they’re less than six inches wide. Though fatbergs the weight of London buses make headlines, even much smaller amounts of FOG are enough to cause big problems for local residents and business.

Steve explained how the regulatory landscape in the UK places responsibility on water companies to reduce the impact of blockages. Yet the country’s legislation puts little onus on those who contribute to causing them.

Water companies are targeted to reduce pollution incidents, floods and prevent blockages – and the industry’s regulators can impose financial penalties if those targets go unmet. Yet little legislation exists to prevent the causes of blockages – often customers putting the wrong things down their sinks and toilets, along with incorrect equipment or poor practice by FSEs.

While blocking a sewer is a criminal offence under the Water Industry Act, putting the wrong things down drains is not an offence if it does not cause a block. Whether a block occurs depends on the size, type and location of the sewer. So the same behaviour could lead to a block in one place and not in another. In this way, the law is reactive – it can only be enforced when the damage is done.

Steve also revealed that no universal standards are in place for grease management systems – such as an agreed flow rate or level of FOG retention. Instead, manufacturers can self-certify whether their products are appropriate. Even if FSEs want to do the right thing and install a system to catch FOG, gauging the effectiveness of the options available can be tricky without a consistent benchmark.

UK water companies work hard to prevent blockages and protect communities from flooding. Our own FOG and Unflushables team proactively identifies blockage hotspots, physically unblocks sewers and explains to customers how they can prevent blockages harming their homes and communities. However, water companies will only succeed if other areas of society join the fight.

Steve W shared his vision of a regulatory landscape where FSEs, manufacturers and domestic customers share the responsibility for beating blockages. Updated legislation and universal standards about FOG management would help provide clearer guidance for FSEs, manufacturers and domestic consumers – so everyone knows what they’re expected to do to protect homes, communities and the environment from fatbergs.

Alongside allowing us to share insights about the situation at home, the summit gave us an opportunity to hear how the situation is different abroad.

In Holland, the landscape is the reverse of the UK. All FSEs are obligated to fit grease management that must perform to defined standards, yet causing a blockage is not a crime. Meanwhile, the USA’s system of government – with counties and local councils – allows local legislation to be put in place to put pressure on FOG recovery.

Although we have less legislation than most other countries represented at the summit, UK water companies’ work with FSEs, manufacturers and policymakers to tackle fatbergs is making progress. In fact, we’re pleased that both Steve Edwards and Steve Williams were shortlisted for The Future of Utilities’ Rising Stars award this year in recognition for their contribution to the sector.

UK to host the next Summit

Next year, the European FOG Summit comes to the UK. Southern Water looks forward to hosting the event in Brighton in May 2021.

We welcome other UK water companies to join us at the event, which will feature a keynote speech by our Chief Executive, Ian McAulay.